Towering Federal Debt Is Hidden In A "Roach Motel"


David Stockman, White House budget chief under President Reagan, notes it took the United States 205 years to reach $1 trillion in debt, but only 33 more years to get to the current $18 trillion debt mountain. And he says things are about to get worse.

In Stockman's recollection, the stage for today's fiscal irresponsibility in Washington, D.C. was set in the 1980s, when Congress finagled to show delayed revenue gains from tax increases and a massive payroll tax was buried in a Social Security rescue plan.

"Thereafter, Social security and Medicare entitlement reform was off the table due to the trick of the front-loaded payroll tax increase," he wrote on his Contra Corner blog.

"Likewise, the White House took any further tax increases or defense cuts off the table in January 1985. The spending-cut weary politicians of both parties, in turn, were more than happy to oblige by shelving any further meaningful domestic spending reductions, as well.

"So in 1985, fiscal policy went on automatic pilot — where it has more or less languished ever since."

Stockman estimated today's federal debt amounts to 106 percent of GDP, and when state and local debt is factored in, total government debt is 120 percent of GDP – a load that would put many Americans in a homeless shelter if they owed it money on an individual basis.

In his view, what makes today's titanic debt burden possible is concerted action by the Federal Reserve and other central banks to create massive credit expansion and the fact the Fed sells Treasurys to other countries.

"It was the equivalent of a monetary roach motel: the bonds went in, but they never came out."
In Stockman's view, the massive monetization of the public debt cannot go on much longer or the global monetary system will be destroyed.

He believes the rosy scenario currently projected by the Congressional Budget Office (CBO) for 4 percent GDP growth in coming years is ridiculously optimistic and "does not have a snowball's chance of materializing over the next decade. Rather than $8 trillion of cumulative baseline deficits over the next 10 years as projected by CBO, the current policy stalemate in Washington — that has been running for 30 years now — will generate at least $15 trillion of new public debt in the decade ahead."

When that new debt is added to the current $18 trillion hole the nation has dug itself, the mountain of public debt will hit $33 trillion in 10 years, he wrote. At that point, Stockman estimates America's public debt will total a whopping 140 percent of GDP.

The federal debt has risen 70 percent under President Obama, and when it hit $18 trillion last week, it meant that each household in the U.S. now carries the burden of $124,000 in national debt alone — or $56,378 per individual, according to GoldCore's Mark O'Byrne.

"This does not include the massive private debt or household debt burden – people's mortgages, personal loans, credit card debt, student loans, car loans and other household debt," he wrote.

According to the National Bureau Of Economic Research, the average annual income for the working class in the year 1800 was a mere $300 a year.  However when the average rent was about $100 a year, and you could buy a loaf of bread for a nickel, and a haircut cost a dime, it's obvious that was enough to live on - back then.  Today, $300 a WEEK is considered above the poverty level, but still on the low side.

But still, even taking inflation into account, 17 trillion in 33 years is mind boggling.  But just how much is even one trillion dollars?

If you spent $1 million a day since Jesus was born, you would have not spent $1 trillion by now... but ~$700 billion- same amount the banks got during bailout.

Note in the diagram below we see a  human figure.  This is what one hundred million dollars looks like.  It is about three feet high and the size of a forklift pallet. 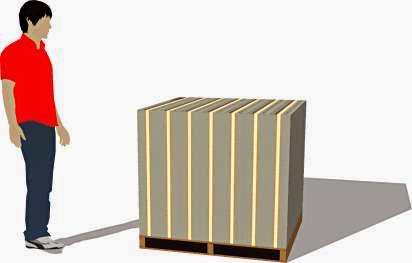 This is what only one trillion dollars looks like.  Multiply that by 18 and you have our national debt.

National Socialism means responsible spending, not reckless spending.  And one of the reasons why there is so much waste is because of Judeo-Capitalism.  The Judeo-Capitalists WANT this to continue so that they can continue to profit.  They know as well as anyone that this will eventually cause a financial collapse.  However they will be so wealthy, hell they are already so wealthy that none of that will matter to them because they will have so much money they can buy whatever they want regardless of inflation.

National Socialism looks out for the little guy.  Judeo-Capitalism is for the big guy.  Which one do YOU want to be a part of?  If you still think you have a good chance of becoming rich, you are living in a fantasy world right next to the Baggins family and across the street from Gandolph - or is it Gandolf?  Have you seen Smaug lately?